By Mike Woods France - UK
Friday is the 70th anniversary of D-Day, the Allied army invasion of Normandy in northern France that turned the tide in World War II.
Some 156,000 British, American, Canadian and other soldiers took part in the largest military operation in history. Among them was a squadron of 177 French soldiers. RFIʼs Mike Woods met one of them.

Itʼs been a busy springtime for Hubert Faure. This former warrant officer of the French Free Forces has been receiving many guests at his apartment on the west side of Paris. He celebrated his 100th birthday last week, and this week, he marks the 70th anniversary of his landing in Normandy. 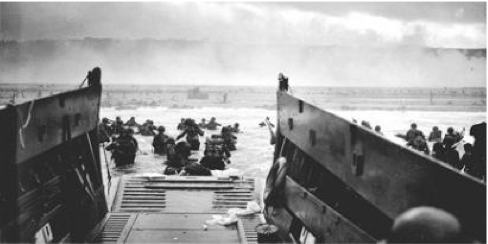 He was already well into a military career when he was mobilized at the outbreak of the war in 1940. Following the armistice, he avoided being taken prisoner and escaped capture once on his way home to southwest France. He came to his home and began working with the French Resistance, an activity he continued until late in 1942.

“One of our comrades accidently revealed I was taking part”, he told me. “Luckily, the colonel in the region knew me and said I had to leave, so I fled to Spain. Like everyone who went there, I was arrested and spent the winter in a concentration camp. In Spring, I escaped, and went to Portugal on foot.”
From there, Faure flew to England. He entered under the command of Philippe Kieffer, a French navy captain who set up a special commando force with the British army. After intense and selective training, Faure knew something big was coming in late spring of 1944.
“On May 25th, Kieffer gathered everybody and said we were going to carry out a decisive operation that would take us into France. He said half of those who went would fall, and that anyone who wanted to quit had to do so immediately. No one backed down, so we went to Southampton.”
They spent ten days in secret camps, studying their mission. On the eve of the invasion, they went to their barges, understanding theyʼd start the new day doing battle.
Faure remembers it clearly: “We were to leave as quickly as possible so everyone would get a bit of sleep, but it wasnʼt possible, because the sea was too rough. All night long, all around us, the Allied planes were flying, dropping bombs on the coast. You can imagine the atmosphere."
They arrived at Sword Beach by the town of Ouistreham in the morning, arriving just after seven in the morning, timing their landing with the low tide.
“At the low tide, any mines will have been washed away. All the same, we were under fire, some men were killed. So we had to jump into the water, with 30 kilos of supplies, weapons and ammunition.”
Faure describes a long day surrounded by missiles and smokescreens, in a landscape lined with battleships and warplanes screaming overhead. The commandos separated and regrouped, lost their radio communications and made contact with civilians. Their mission was to disarm a casino transformed into a blockhouse, and doing so meant advancing through mine fields and blockades. Finally, when the day was over, their general gathered them in a café...
“The general welcomed us, said he was happy we made it. He gave each of us a glass of champagne and we made a toast, with the general."
Of the 177 commandos, there were 44 casualties on D-Day, including ten deaths. They continued to fight through the Battle of Normandy [2] that raged through the summer. Faure at one point spent a month recovering from an injury.
He is one of ten commandos who remain, and on Friday he returns to Ouistreham, among the 3000 veterans joining French President François Hollande for official ceremonies in Normandy.